«Elevated heart rate (HR) predicts cardiovascular morbidity and mortality in both diabetic [1,2] and non- diabetic individuals [3,4]. HR is the result of fitness, neurohormonal factors and the autonomic nervous system function. In type 2 diabetic patients, HR is faster [5] and this may be related to cardiac autonomic neuropathy (CAN). Fasting plasma glucose is associated with higher resting HR [6] and in the Insulin Resistance Atherosclerosis Study, HR was associated with insulin sensitivity and with the acute insulin response to glucose [7].»

«Known diabetic participants had a more severe cardio-vascular risk profile: 75% had the metabolic syndrome in comparison to only 15% in normoglycemic individuals.»

«HR was related with glycaemic status (Figure 1), particularly during recovery after deep-breathing, and during subsequent rest (P < 0.04,0.03), and known diabetic patients had the highest HR.»

«HR was higher in those with the metabolic syndrome for all test periods (Table 2), but was attenuated after adjustment on BMI with a significantly different HR remaining only during deep-breathing.»

«HRV was more closely related with glycaemic status at deep-breathing and particularly at recovery, than at other periods; patients with known diabetes had the lowest HRV (Fig. 3 A-F). At recovery, the detected diabetic and IFG individuals had similar HRV, and all six HRV indices were significantly lower than in those with normal glucose.»

«significant HR difference between the four glycaemic groups; treated diabetic patients had the highest HR, those with screened diabetes or IFG had slightly elevated HR in all test periods; HR was correlated with capillary glucose and triglycerides during all test periods;»

«HR which continued to increase between deep-breathing and recovery in diabetic patients in contrast to other groups;»

«The present data suggest that glucose is a determinant of HR.»

«In our study, in the known diabetic patients, HR increased less between rest and deep-breathing and continued to increase during the recovery time after deep- breathing while in all other groups, HR decreased, the differences remaining significant after BMI adjustment.»

«These results suggest that this relatively simple test has good sensitivity, and could be a new marker, worthy of evaluation.»

«Lower HRV has been reported in fasting hyperglycemia [3], glucose intolerance [14]; the metabolic syndrome has been implicated in reduced HRV in non-diabetic individuals, independently of glucose [3]. Some data suggest that HRV impairment is associated with more severe insulin resistance in non-diabetic obese individuals [24].»

«The value of this simple forced deep-breathing test warrants further evaluation in diabetic as well as in pre-diabetic patients.» 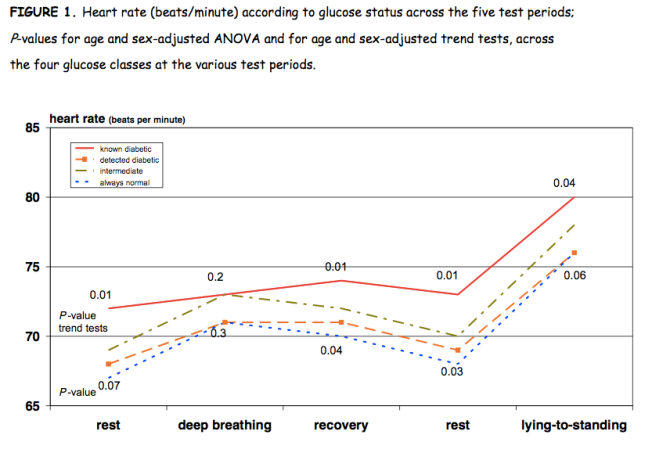